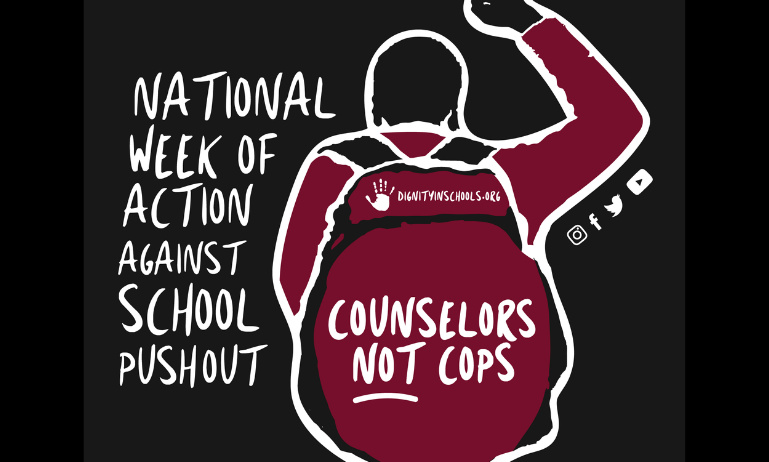 Central Valley, CA.… As part of the National Week of Action Against School Pushout, the Central Valley Movement Building (CVMB) coalition, and community-based organizations from other parts of California, are holding a series of events and are sending out press releases focused on the theme and demand, “Counselors-Not-Cops: Rethinking School Safety.”

One of the reasons for the Week of Action, is that the Central Valley has the highest rates of in-and-out of school suspensions of all the regions and counties in California, that disproportionately impacts the poor, students with disabilities, LGBTQ youth and youth of color. (1)

Suspensions and expulsions cut off students from the positive interactions of schools, also setting students up for a variety of negative life outcomes. School Resource Officers (SRO’s) interfere with the overall opportunity for students to learn, in some cases creating the very sense of fear and violence that they are supposed to prevent. Causing students to miss school or otherwise become disengaged from school sets off a chain reaction of missed opportunity that leads to a “school-to-prison pipeline” that ends in future justice involvement3.

In the Central Valley, Elk Grove Unified, Stockton Unified and Clovis Unified respectively had 873, 307, 203 referrals to law enforcement in 2015/16. The school related arrests during the same time period were lower, but still significant in other Central Valley districts, including Fresno Unified, 159, Sacramento City Unified, 158, Clovis Unified, 114 and Tulare City 56.

Districts are prioritizing school police funding over student needs. For example, Clovis Unified pays for the salaries and supplies of its police department, including firearms and ammunition, with money earmarked for the needs of low-income, foster youth, and English learner students. The Clovis district LCAP includes approximately $1.5 million to fund school resource officers, with just over $741,000 of the allotted sum going to the salaries of 16 Clovis Unified Police Department officers, according to the District’s budget. District spokeswoman Kelly Avants said, on average the district spends around $3,600 on firearms and $2,281 on ammunition every year (5).

The Central Valley is an isolated and under-resourced region; however, CVMB will intentionally and collaboratively work with communities to address broad systemic and transformative changes by increasing awareness and engagement in school discipline reform and redefining school safety.

CVMB seeks to redefine school safety by asking all Central Valley school districts to do the following:

Central Valley Movement Building is a member of Dignity in Schools Campaign California (DSC CA) whose goal is to end the School-to-Prison pipeline and to radically embrace and fight for truly safe, holistic, and healing schools for all.

As local, state, and federal officials call to further police and militarize our schools, Central Valley Movement Building and Dignity in School Campaign California reject these false solutions and demand a new vision of transformational schooling emphasizes supporting students instead of suspending them and locking them up.